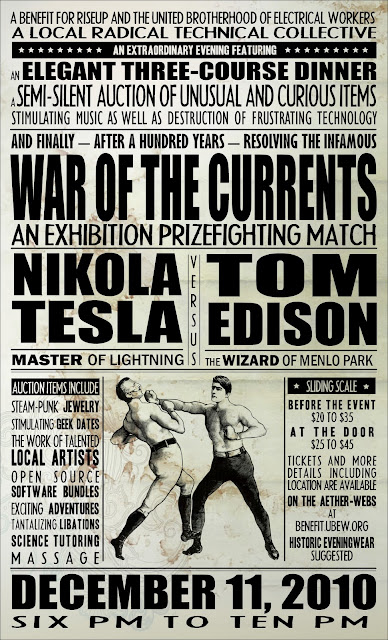 My friends in Santa Cruz are hosting a benefit for Riseup.net and the UBEW. The event, An Evening of Extraordinary Proportions, sounds amazing. From the benefit’s site:

“This Saturday, 11th of December of the year two thousand and ten, we will brawl not to establish the superiority of our rival electrical systems, but instead to put on display for the viewing public, the megalomania, sadism, and dastardly under-handedness of Thomas Edison, capitalist.”

You can’t go wrong with that.

Riseup is basically the radical/anarchist tech collective. Or, at least, the group that offers everyone their email. Seven years ago, people would ask me my email and I would say “guess.” And they would guess correctly. That’s the magic of riseup.

The United Brotherhood [sic] of Electrical Workers is the local tech collective/hacker space in Santa Cruz, that I admit I haven’t checked out yet but some of my friends are involved and it sounds awesome.

I won’t actually be at the event: I’m going east tomorrow. But it really does sound good, and a worthy cause.