What? There’s a bizarre anarchist magazine that you can buy in comic book shops that talks about guerilla gardening and the end of the world? With a homoerotic cover?

Indeed there is! Dodgem Logic is a counterculture magazine produced by Alan Moore, and I’m proud as hell to be a columnist. Of course, owing to the time lag, of an ocean and lacking a fixed address, I haven’t actually even seen issue #3 yet, but #4 is out already! Free shipping in the UK, what’s more. 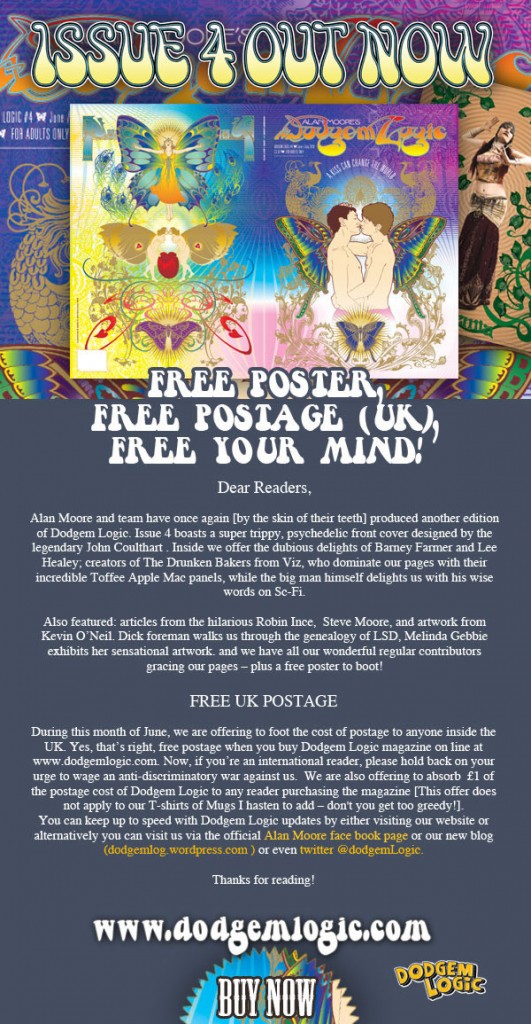 The third issue of Dodgem Logic is almost out (I think it comes out tomorrow, but I’m not sure), and this one features an essay I’ve done about scavenger economics.

With only its third issue just about to be released, Alan Moore’s mystifying neo-underground magazine Dodgem Logic has evidently forced a General Election, brought a government to its knees and secured the release of Twin Peaks Season Two on DVD. Those are the kind of results you can’t argue with and which completely justify hiking our cover price to £3.50, even without our generous increase in size to eighty ad-free pages of wall-to-wall solid content in spectacular full colour.

With a beautiful but nightmarish wraparound cover provided by its increasingly unfathomable founder and this issue’s free gift of a tantalising iron-on T-shirt transfer both delineated and designed by the sublime Melinda Gebbie, Dodgem Logic #3 is our most sumptuous and substantial offering yet. We’ve got more bubblegum-card bios in our series of Historic Hipsters, we’ve got rowdy rationalist Robin Ince exploring the futility of trying to reason with mouthy reactionaries and a genius examination of town planning and its various iniquities by urban spaceman Gary Mills. Britain’s foremost self-defacing comedy darling Josie Long provides some excellent advice, but only if you’re her about ten years ago, while hilltop hierophant Steve Moore serves up a comprehensive absinthe-scented guide to the degenerates, dandies and demi-gods collectively known as the Decadents.

Fulfilling Dodgem Logic’s remit of unhelpful crazy talk, Alan Moore offers a straightforward user’s guide on how to practice hellish sorcery in your own living room, and frowning boy-king Steve Aylett’s sobering Johnny Viable concludes with a display of octopi and flirting Chinese warlords that maybe, just maybe, shows us how to love again. Melinda Gebbie takes us on the first leg of a two-part tour through the delinquent dreamtime of Beat-era San Francisco, the immensely civil but post-civilised Margaret Killjoy walks us through her blueprint for a scavenger economy, and self-sufficient-ish Dave Hamilton sows some genetically modified seeds of discontent. The awestruck reader will discover flavoursome yet frugal recipes, advanced guerrilla gardening gambits and a first-time voter’s unimpressed appraisal of the democratic process. There are trackside chats and snaps from the electrified-rail frontline of graffiti, diatribes from doctors, a cacophony of columnists, the esoteric etchings and embellishments of cryptic Kevin O’Neill or the mighty Savage Pencil, and instructions for the manufacture of those Joy Division oven-gloves you’ve dreamed of.

Currently funding much-needed school holiday crèche facilities in the mistreated but majestic district that it hails from, Dodgem Logic once again delivers on the promises it never made you in the first place, a refreshing contrast to what you’ll be getting elsewhere during this election period. We know that if our preternatural publication were a little human boy and not a magazine made out of paper, you’d appoint him to rule wisely over you in preference to all the flimsier and less coherent options on display. Frankly, thanks to you, we’re looking at a landslide moral victory.

I haven’t gotten to see it yet (combine international shipping with my itinerant nature), but Dodgem Logic #2 is out now. Dodgem Logic is Alan Moore’s current brainchild, essentially a 60s counterculture magazine for the modern era (replete with strange illustrations of naked people, and advice about how to overthrow the government!). This second issue features an introduction to post-civilization that I wrote, expounding on the Post-Civ zine that Strangers In A Tangled Wilderness put out.

After the appreciative reception afforded to its premier edition, lauded throughout the gutters of the world, the second issue of Alan Moore’s mystifying new underground publication DODGEM LOGIC is available in early February. Delivering 52 pages of full-colour solid content thanks to its flinty-eyed Puritan policy of no advertisements, all for a frankly laughable £2.50, this plucky bi-monthly periodical is stuffed to the gills with wisdom and wonderment.

Behind a choice of three, count ’em, three luscious variant exteriors we have this issue’s cover feature, a sexy yet somehow sinister Burlesque photo spread from internationally acclaimed maestro Mitch Jenkins with an accompanying article on Burlesque past, present and future by our exotica expert, Melinda Gebbie. Former Steampunk supervisor Margaret Killjoy offers a pertinent and practical guide on ways to usefully pass our time before and after the collapse of civilisation, while Fortean Times godfather Steve Moore delivers a surreal survey of Northamptonshire’s bizarre phenomena, from phantom panthers to confused old men in treetops.

In addition to these delicacies, DODGEM LOGIC’s regular contributors continue to work their magic, with the exception of Josie Long who had a flimsy excuse and will be back next issue. Dave Hamilton’s environmental Eco Chamber column looks at the more worrying side of social network groups, while teenage mum Tink takes over our women’s page this time DL_covers_alt:Layout 1 around with an account of life on the disintegrating edge of England’s social services. Guerrilla gardener Claire Ashby dishes out another instructive communiqué from the urban undergrowth, spooky seamstress Tamsyn Paine knocks up an exploitative freak-show sock puppet, the magazine’s Spinning Doctors dispense more healthcare advice, winsome Wendi Jarrett cooks us a Valentine feast while M.C. Illuzion ruins our appetite for it with a discourse on Mechanically Recovered Meat. Meanwhile graffiti goddess Queen Calluz introduces us to three more Great Hipsters in History. Deities of delineation Savage Pencil and Kevin O’Neil continue to enthral, bewilder and unsettle with their subversive scrawls, while the unearthly Steve Aylett poaches the collective mind of the readership in tears of despair with his obscurely terrifying comic strip adventure, Johnny Viable. Then there’s the insurrectionary ranting and refined musical appreciation of eight-page local insert section, Notes from Noho, with the whole enterprise rounded out by Alan Moore’s illuminating dissertation on the history, difficulties and numerous delights of anarchy.

DL_covers_alt:Layout 1 Extending the ingratiating policy of quaintly and nostalgically including a free gift with every issue, and replacing the astonishing free CD of our debut, DODGEM LOGIC’s unkempt figurehead and founder also contributes a questionable eight-page mini-comic, Astounding Weird Penises, being the only solo comic book that he has managed to create in his otherwise lazy thirty year career.

With only one issue beneath its belt, DODGEM LOGIC has already managed to supply each of the sheltered-housing tenants of the area in which it had its origins with a halfway decent Christmas hamper, and is currently sponsoring its own top-rate basketball team from the same neighbourhood. If future issues do as well, the magazine hopes to extend its various activities across the district and then, ultimately, to construct an orbiting missile platform and demand all the Earth’s uranium.

DODGEM LOGIC ~ chuckling and stroking a white cat for a better tomorrow. Well, the first issue of Dodgem Logic is out, the new “underground magazine” published by Alan Moore. It’s an attempt to bring elements of the ’60s counter-culture into the current era, I believe, and I’m pretty excited to get my hands on it. The second issue will feature an article I’ve written expounding upon post-civilized theory.