XKCD has saved me.

One of my friends has a pickup truck, and he doesn’t actually tell many people he has a truck, because otherwise he would be buried under a deluge of requests to borrow it. I feel similarly about being computer literate. The funny thing, in my mind, is that I’m not computer literate. I learned how to fix networks and build websites back in 1999 or so, and I never actually bothered catching up to what goes on a decade later. I use computers a lot, but I mostly use them for media stuff, like InDesign and such. And yet, so often people ask me to help them fix their computers, or solve problems or whatever.

So my basic plea to you is: if you are someone who works on computers every day, learn the basics of how they work! It’s one thing to call in help when you’re exporting a file and it ends up corrupt somehow. It’s another to not know how the folder structure works on the operating system you use.

Anyhow, here’s a handy chart from XKCD that explains everything. I will be printing them out and distributing them.

I think that most people who are computer-literate are fundamentally self-taught, primarily through trial and error. Perhaps it is because of this that being asked to solve problems all the time is irritating… we had to do things the hard way. But I will, begrudgingly, admit that sometimes it makes more sense to ask someone in the room rather than spend an hour trying to solve a problem. It’s just that whole “teach a person to fish, and they’ll be able to eat until commercial fisheries permanently destroy the stock of fish in the ocean” thing.

Another conversation, with someone who studies medicine. “How do you think I feel,” he says. “Every time someone cuts themselves, they come to me. They never actually bother to learn how their bodies work.”

It’s one thing to have specialization in a society, another for people to not know how to troubleshoot basic problems that they are likely to run into on a regular basis. 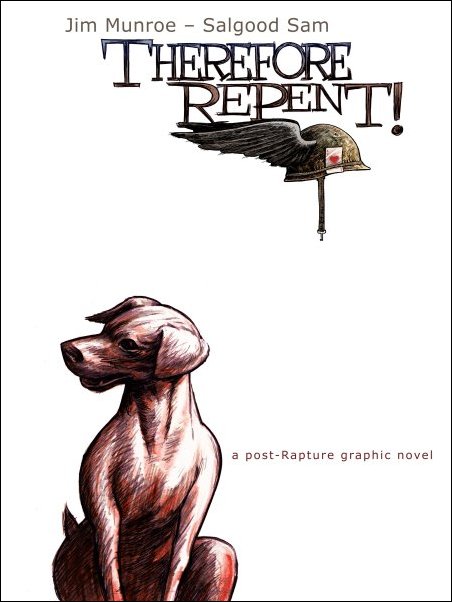 One of my favorite stories I’ve read so far as part of my research into anarchist fiction has been Jim Munroe‘s Therefore Repent!, which he has just made available for free download on his site. It’s a graphic novel about the rapture happening, and what happens to people who stay behind. I don’t want to ruin it, but it’s got some seriously great moments.

The reason he’s putting it online is to try to drum up interest in the serialized comic (that’s funny… graphic novels have become the norm, I think) that takes place in the same universe. It’s called Sword of My Mouth and it’s available for pre-order for those of you who do things like go to comic book shops.

Anyhow, one of the interviews I did was with comic book author Alan Moore. And it might just be my favorite interview I’ve ever conducted. It’s been posted on infoshop for a long time now (yes, putting together a book takes a long time, it turns out), but for some reason that page seems to be defunct, only showing the first paragraph or two of the interview. So I’m reposting it here, after the break. (It has also been translated into what appears to be Ukrainian or Belorussian.)
END_OF_DOCUMENT_TOKEN_TO_BE_REPLACED